Feeling punky and sick today; not sure if it's asthma, allergies, a cold or just fatigue from M's ordeal last week still stressing me out. But regardless of what happens I will get in my walk today. Made a commitment to myself and I will see it through.
I joined a challenge on WW called hiking the AT - it's a virtual hike of the Appalachian Trail based on actual outdoor miles you log in walking, running or biking. It will be interesting to see how I get along. Starting in Georgia and doing north. Since starting walking again Thursday I've gotten in 12.93 miles, so that's only an average of 2.16 per day. Think I'll have to step it up a bit!
Posted by Chester Scotties at 11:45 AM No comments:

Lots of activity on Facebook including finding Bill! Too funny to see all these people FBing away - whoda thunk it?
Gorgeous day yesterday - walked both dogs on the V leash over to Mom and Bill's then back. Nice walk, 2.82 miles in 56 minutes. Lots of hills! Even the dogs were tired after, and they're little troopers. 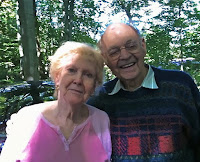 Maniek's nose is healing well although it's so hard for him to breathe right now. Sees the doc on Thursday so maybe he'll get some relief then.
Posted by Chester Scotties at 6:29 AM No comments:

Last week I was reaching for a cotton pad in a glass jar in my bathroom (I know, sounds like TMI but it's not) and my hand got stuck in the jar. So I opened my fist and took it out of the jar. The experience made me think of a documentary I saw once about finding water in an arid area, I think in Africa, using monkeys. It's done by putting something attractive in a jar with a small mouth. The monkey reaches in, closes its fist over the treat, then can't pull its hand back out. Monkeys apparently won't let go once they have something tasty, even though it traps them. Eventually the monkey gets thirsty and seeks out water - the trapper follows and voila. I can't remember if they released the monkey eventually but I hope so. Trapped by greed and the inability to let go would be a horrible way to die.
It struck me that I am like the monkey with its hand stuck in the jar. This made me think about being fat, spending too much money, grabbing everything there is to have and never letting go. I want it all, even though having it has trapped me in a fat body, in poor health, in debt, in dissatisfaction. So I decided that I need to open my hand and let go of all the things I think I want and only take the things I truly need. Sounds so simple, but I know it will be a struggle.
My friend at work inspired me to join WW again - she did and is having great success. I'm hoping that this time around I will learn to enjoy having just a little bit and that I can apply that to other areas of my life. Eat less, buy less, want less, but treat myself better. The only things I'll be having more of are exercising and taking care of my family and myself. We'll see.
Posted by Chester Scotties at 10:06 AM No comments: 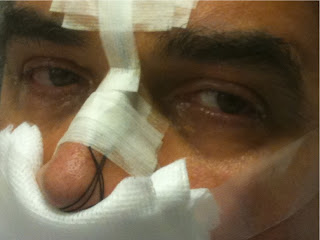 So, he finally had the operation and hopefully will be able to breathe, and get rid of the sleep apnea problem. I'm happy! He's in a bit of pain right now, but we see the doc again tomorrow and the packing comes out, so it might feel a little better.
On a related note, during the pre-admission testing it was discovered that he has a problem with his heart. He goes for a nuclear stress test in three weeks, then a follow-up with the cardiologist. I am so thankful that he decided to have this surgery so they found and can fix his heart/sporadic HBP now. Would have sucked if he hadn't known about it and something bad had happened.
Posted by Chester Scotties at 10:01 AM No comments: